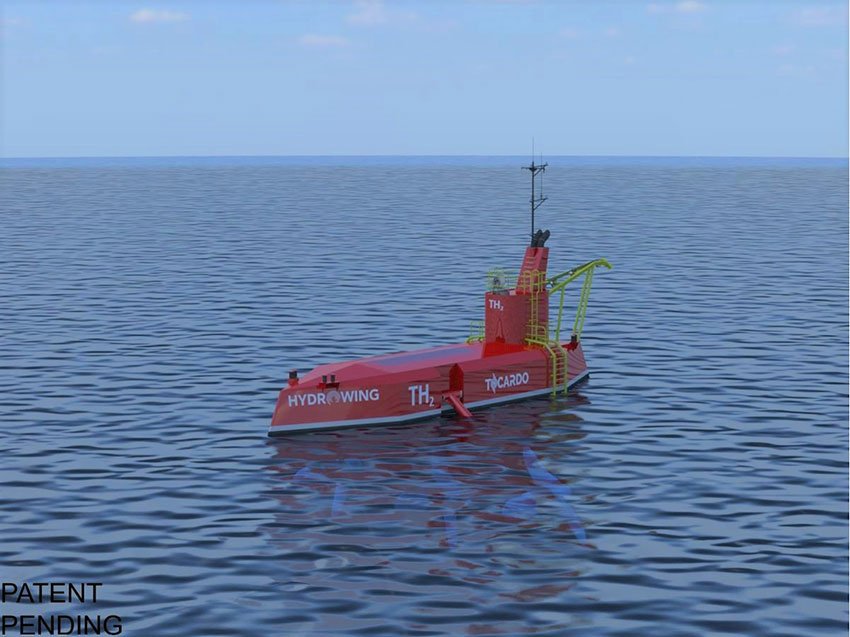 HydroWing, in partnership with Tocardo, is delighted to introduce the THyPSO (Tidal Hydrogen production, Storage and Offtake), an innovative and novel concept that creates green hydrogen from the sea, contributing to the wider global decarbonisation of energy systems.

THyPSO is a floating platform, housing 1 – 6 conventional bi-directional tidal turbines that convert tidal flows into electrical energy, which  is then directed through an integrated hydrogen production unit, converting the unlimited supply of surrounding seawater into hydrogen, an energy-dense and versatile commodity. 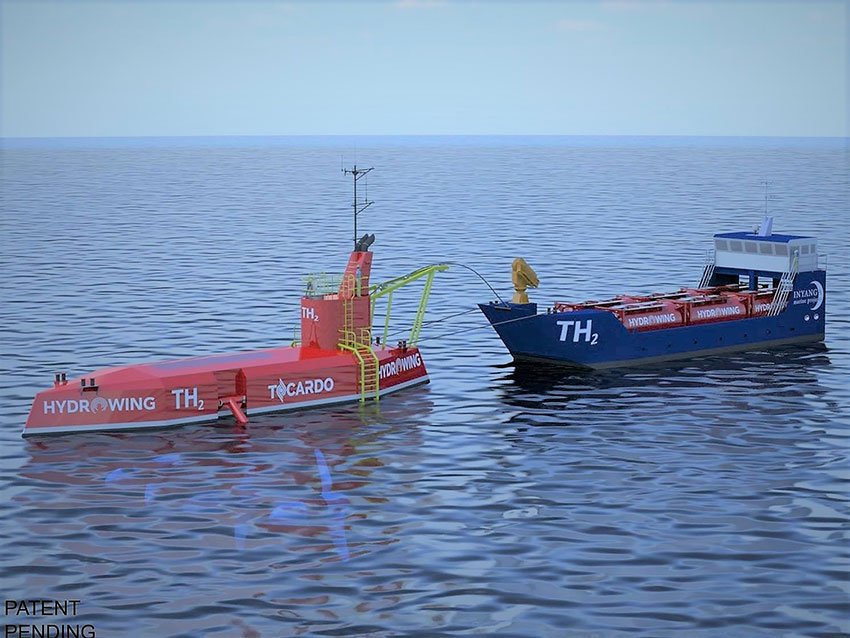 THyPSO has capacity to hold up to two weeks’ worth of hydrogen production in pressurised storage tanks. Offtake is scheduled autonomously by remote communications and discharge occurs within a single slack tide.  A simple and safe procedure using an offtake vessel moored down-stream of the device, connected via a pressurised delivery hose.

Hydrogen is a much more versatile commodity than electricity, it can be stored and used for a wide range of applications, eliminating carbon emissions from maritime transport, agriculture, aquaculture, fishing, tourism, leisure, Petro-chemicals, road transport, rail transport and grid balancing.

THyPSO combines the advantages of tidal and hydrogen technologies, mutually overcoming technical and financial barriers faced by each technology alone. By being autonomous of the grid and eliminates expensive and high-risk subsea infrastructure, creating substantial savings on OPEX and CAPEX, as well as installation and decommission.

Another key issue with producing electricity from any renewable source is the intermittency of production. By producing hydrogen instead of electricity, the offtake and onward distribution can be actively managed and scheduled to suit weather windows and market demands at the time. Consenting, installation, and decommissioning are other areas where substantial time and costs can be saved.

The THyPSO project will demonstrate streamlined implementation of tidal energy projects with a view to upscaling and rolling out larger projects across Europe and the rest of the world in the coming years in line with the ever-growing demand for green sourced hydrogen.

Richard Parkinson, Managing Director, HydroWing Limited: ‘This project has shifted our focus to a broader and exciting market where we can make use of our tides to provide a more versatile energy mix into the local communities and beyond. I sincerely hope that we can inspire greater use of green hydrogen in the marine sector as a result of this project.’

Andries van Unen, CEO, Tocardo B.V.: ‘This project provides a new perspective and a versatile use for tidal turbines. The project is well suited to the range of Tocardo turbines allowing us to effectively scale up as demand for green hydrogen increases into the future.’

Roughly 70 million tonnes of Hydrogen are produced annually representing a market worth over £100 billion. Hydrogen is utilised for a wide range of current industrial processes from ammonia, methanol and metals production and refinery of oil. Currently 98% of this demand is met by non-green sources resulting in around 830 million tonnes of CO2 a year; equivalent to the emissions of the UK and Indonesia combined. The production and use of Hydrogen is an ever-growing sector of interest and has been highlighted by nations across the globe as instrumental to forming a zero-carbon economy. Additionally, with its high energy density Hydrogen has been marked as a clean alternative and essential fuel to contribute to the decarbonisation of the electricity, heating and transport sectors which, will only see this demand rise exponentially in the coming years.

You can find out more about which cookies we are using or switch them off in settings.

This website uses cookies so that we can provide you with the best user experience possible. Cookie information is stored in your browser and performs functions such as recognising you when you return to our website and helping our team to understand which sections of the website you find most interesting and useful.

If you disable this cookie, we will not be able to save your preferences. This means that every time you visit this website you will need to enable or disable cookies again.